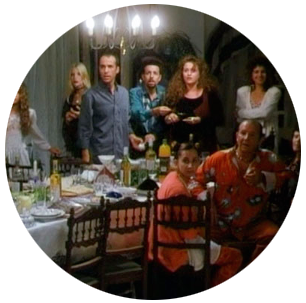 Since a very young age, cinema was my passion. In my teens I had a subscription to the Cinematheque, and watched lots of films every month. Each month was dedicated to another filmmaker or had a theme such as “Japanese Cinema”, or “Film Noir”. During the month dedicated to the great Italian director Federico Fellini, I watched all the films he has made up to that point, about 20 of them (in one month!). It was then that I discovered the incredibly moving music of Nino Rota, Fellini's regular collaborator on all of his films (until he died). Never before have I heard such amazing music, full of happiness and sadness at the same time, and never before have I watched a film in which the music was inseparable and had such an important part. My life changed – I knew that from now on I will be a film composer. Because of Nino Rota and Fellini.

In the examples in this section, you will be able to observe what a film composer does. A film composer is like a Haute Couture fashion designer – he or she composes music which fits the film like a glove, or like a very expensive dress or suit which was designed to fit a specific person, tailored according to this person's specific body measures. Enjoy!

A man is about to jump from the roof of a building. In the building lives a woman. The man says to the woman, "if you don't forgive me, I'll jump". The woman says nothing.

This is one of this psychological thriller's breathtaking climaxes, staring 2 of Israel's leading film and theater actors, Gila Almagor and Moshe Ivgy, darkly and masterfully shot by veteran David Gurfinkel, and featuring an exciting, complex orchestral score which won the Israeli Academy Award for Best Film Score. The film won 7 Academy Awards, including Best Director.

Performed by Ady Cohen and the Raanana Symphonette Orchestra

The film's protagonist sings the title song from the musical-within-the-movie, a song about a poisonous femme fatale. Who is the real dangerous one?

Performed by Ady Cohen and the Raanana Symphonette Orchestra

Amir Wolf's thrilling debut film, a mystery drama with a sense of humor that touches on old age, death and the memory of the holocaust, features three veteran stage and film actresses as the film's female protagonists. The theme I composed tried to capture the old, elegant world of pre-war Europe, by using fretted instruments such as a dulcimer, a mandolin and a guitar (reminding us of the zither from the famous “The Third Man” theme), and by writing the theme is a waltzy meter - ¾ – which alludes to the three ladies and their mysterious personalities.

Retired husband Dovik loves to build wooden shelves for Ofra, his wife, even though she probably has too many of those by now. Until...

Performed by members of the Israel Philharmonic Orchestra

Marlena, a glamorous opera singer, arrives at an abandoned hotel troubled, alone, and in need of refuge. Once checking into a room of her own, she enters a realm of fantasy that is quickly interrupted by her own reality and a peculiar need for reconciliation. After reaching out to her mother in desperation and in need of redemption, she is subsequently cast further away into a lonely and altogether desolate place with only a single path left to follow. In the end, Marlena meets her fate in the very place where her dreams once flourished.

The score fills this Lynchian, surreal, stylish and mostly dialogue-less melodrama, with reminiscenses and winks to the Golden Age of Hollywood and to the great operas of the past.

One of Israel's most successful films, starring some of Israel's most popular actors (Gila Almagor, Yosef Shiloach and Alon Aboutboul), this gentle comedy has in its center a big family uniting at the family's big house to celebrate the traditional Passover night. Suspicions, lies, fears and obssessions all surface only to reach a moving climax in which all is not resolved – but at least the masks are off and feelings are bare from now on.

In this emotional final scene, director Zarhin decided to ommit all previously reorded dialogue and sound effects, leaving only the film's central musical theme on the soundtrack.