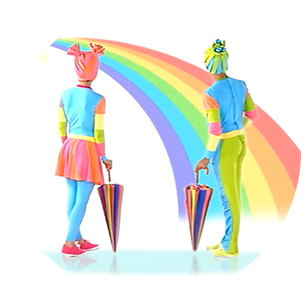 Composing for children has been a specialty of mine even before I had children of my own. I've always loved children. I believe that they are intelligent and open and susceptible to influences in ways adults aren't. That's why I also believe that it is our duty, as adults, as parents, and as artists who create materials for children, to give them only the best, to expose them only to works of art of the highest artistic quality possible. The naiveté children possess makes them vulnerable. We can easily lead them to a direct route to crass, low-quality junk. But they are open-minded and intelligent enough to embrace high-quality, sophisticated art, thus embarking on a route that will lead them to become adult lovers of fine art. I've always chosen to give them the best I can – music which is suitable for children without being childish; sophisticated without being smarty; and at the same time, simple – but without being simplistic. My success with young audiences has proven that it is possible, as evidenced on the examples in this section.

Renowoned animator Gil Alkabetz (“Run Lola Run”) is one of my frequent collaborators. I composed music for 4 films he created, two for adults and two for children. The two children films were commissioned by the long-running highly acclaimed German TV children program, “Die Sendung mit der Maus” (WDR). Gil decided to make them about time: the first, “Ein sonniger Tag” (Sunny Day) is about the sun (=day), and the second, “Wollmond” (Wooly/Full Moon) is about the moon (=month). I absolutely adore Gil's work, and especially these two films we made together. Both films were also screened in numerous animation festivals around the world, winning numerous prestigious awards.

Performed by Yigal Tuneh – violin, Ady Cohen – all other instruments

Fox International Channels' Baby TV is the world's most popular TV channel for little children. It is broadcast in 140 countries, in each country in its local language. I composed the music for Baby TV's most beloved series and songs, hours of music of which I am very proud. The charming and optimistic “Morning Song” is broadcast every morning on Baby TV – in each country in a different language, and it has become a huge hit, as evidenced by dozens of millions of Youtube views.

“Caspion” is one of Israel's most beloved children's books. When I was asked to compose the music for the film adaptation of the book, I decided to have as my guiding inspiration “Winnie the Pooh” - another children's book adaptation which kept the exact style of the original drawings. Disney's spirit is there somewhere in the music of “Caspion”...

Here is the opening song from the film (there are 4 songs altogether). I believe that children deserve and have the ability to be exposed to complex, structured pieces of art, not only simplistic creations, and with that in mind, I decided that 3 out of the 4 songs in “Caspion” would be sung by a 3-voice harmony trio. It's not that easy to figure out the melody in a 3-part harmony line, but I was certain that even small children (the target audience of “Caspion”) would be able not only to figure out the melody, but also to get attached to it and love it. After the film “Caspion” became one of Israel's greatest children's hits, which it is until today, and after receiving countless adoring reactions from excited children and their parents, I can say that I was proven right. Then, in 2012, I received the most prestigious accolade for my piece – the ACUM Award.

This hit TV series, winner of the Israeli TV Academy Award for Best Children and Youth Program (2009 and 2010), ran for 2 seasons (and a total of 98 25-minutes episodes). The music I composed for the opening credits was also one of the main musical themes of this suspensful series, described by its creators as “1984” for children. The stars of this series are some of Israel's hottest teenage stars, and director Dar also directed the international hit “Ushpizin”.

Another huge hit on Baby TV, this song comes at the end of each episode of the series “Charlie and the Numbers”, and quickly became a favorite with both children and parents. The song, which teaches children counting from 1-10, has millions of views on Youtube, accompanied by ecstatic comments, as well as many home-made versions of young fans performing it.

Another gem from animator Gil Alkabtz, and our first collaboration for WDR's “Die Sendung mit der Maus”, “Ein sonniger Tag” (Sunny Day) is a sweet and funny film about a day in the life of... the sun.

One of Baby TV's most successful and long-running series, spanning 3 seasons, this is from season 1 (the other 2 being “Vegimer” and “Vegibugs”). For this sweet series, centered around baby animals and made entirely from vegetables (simulated in 3D), I wanted the baby animals' voices to be human. Fortunately, I found the perfect actor for the part right in my own home – my son Lyle, who was only 3-years-old at the time.

One of my favorite series for Baby TV is the charmingly magical Tipa Tupa, in which a man and a woman encounter a different object in each episode. The series is a dialogue-less mixture of live-action and animation, filled with movement, dance and music. Here is a compilation of some of my favorite sequences from this magical show, compiled from various episodes ("Umbrella", "Bucket", "Broom" and "Chair").

“Sesame Stories” is a wonderful international project created by the people of “Sesame Street”. I composed music for many of the animation segments on this show. This colorful story was created by renowned animator Rony Oren, who specializes in clay animation.

After the huge commercial and critical success of “Caspion”, I was asked to join again the same creative team behind that film and create a new hit. “Trunk Tales” became almost as successful as “Caspion”, and was even released in the United States (in English) and in Mexico (in Spanish). Here is one of the songs from this tale of a little elephant who wanted, and succeeded, to be different. This is the Spanish-speaking version of this song.